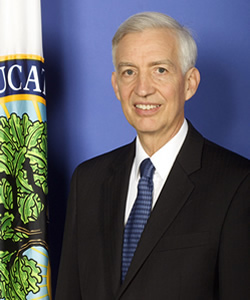 In the spring of 2007 I had a routine colonoscopy. I was told that the biopsy of tissue removed from the very top of my colon was abnormal and pre-cancerous. Because of the position of the tumor, it was impossible to remove it without surgery. I had an appointment with a surgeon who explained to me that he would remove a section of my colon and small intestine. He also said he would remove lymph nodes in the region. I was reluctant to have such radical surgery for what I understood was a pre-cancerous tumor, but I decided to go ahead.

When I woke up in the hospital after the surgery my surgeon checked on me and rather casually said, “We’ll know for sure when the lab results come back, but it looked to me like you have full blown cancer.” He was right. I was diagnosed with stage 3-C colon cancer. Not only was the tumor cancerous, but lymph nodes were infected with cancer cells.

I was referred to an oncologist. The visit was terrible. She explained to me that among those patients with my diagnosis, half are still alive after 10 years—with treatment. Without treatment, 25% are alive after 10 years. The chemotherapy she proposed would be administered every two weeks for six months. Then she described a number of possible side effects.

I decided to check out options. Since my daughter has a degree in naturopathic medicine, I talked to her and she suggested I see a doctor in Phoenix. He recommended the Block Cancer Center that was then in Evanston, Illinois. Although I lived almost 500 miles from Evanston in Nashville, I decided to travel there twice a month for six months of treatment.

There were two factors that figured into my decision. The first was the chemotherapy available from the Block Center—chronomodulated chemotherapy, an innovative approach to infusing by following circadian rhythms with specific timing. This was delivered the same way as a multisite study in France, which showed substantially diminished side effects and very much improved treatment benefits and, following these findings, was implemented in other countries. I read reports of studies that claimed the survival rate in France was greater than that in the United States. It was hard for me to understand why American doctors didn’t choose to use the treatment method that studies showed was the most effective. But I was glad that Dr. Block wanted to provide his patients with the most effective treatment available in the world. Secondly, I was impressed with Dr. Block’s holistic approach to help me heal. The emotional support from Penny Block, supplemental medications, dietary recommendations, physical activity guidance to build strength and stamina, and other things also played a factor.

When my treatment began, I had additional reasons to travel 1,000 miles round trip to receive treatment. The architecture of the center was nothing like I had seen at the first oncologist I met with. In the initial clinic I visited, metal chairs were lined up in the hall near the oncologist’s office. Patients sat in a row, each connected to a drip. There was no space, no privacy, no comfort. The Block Center had a large inviting lounge with doors leading to very comfortable sitting rooms. The sitting rooms had windows and were large enough that when my wife accompanied me, we could spend time there without feeling crowded. Those spaces provided privacy to meet with the doctors or make phone calls. The lounge was a place to meet and visit with other patients. We shared stories about our treatments and our lives. It was a supportive community, even if the people were strangers.
At every one of my treatments I met with one of the doctors. Usually they asked me about any side effects or discussed the progress of my treatment. One time the doctor came in and excitedly told me about a just-published study that showed a tremendous benefit from exercise during and after treatment. At the time I wondered how many people receiving cancer treatment had doctors who were watching the research for anything that might further benefit their patients—beyond just the newest chemo drugs.

Now it’s been more than 10 years since I was diagnosed with colon cancer. All tests indicate that I am free from colon cancer. In 2017, I was diagnosed with prostate cancer. Now I live in Colorado. I looked around for a treatment center in Colorado like the Block Center—a truly integrative system of care—but because of my experience with the Block Center, I knew to put together a team to support me. If my colon cancer had not been treated at the Block Clinic, I would not have been prepared to face prostate cancer.

I am thankful to the Block Center for the life I have now.