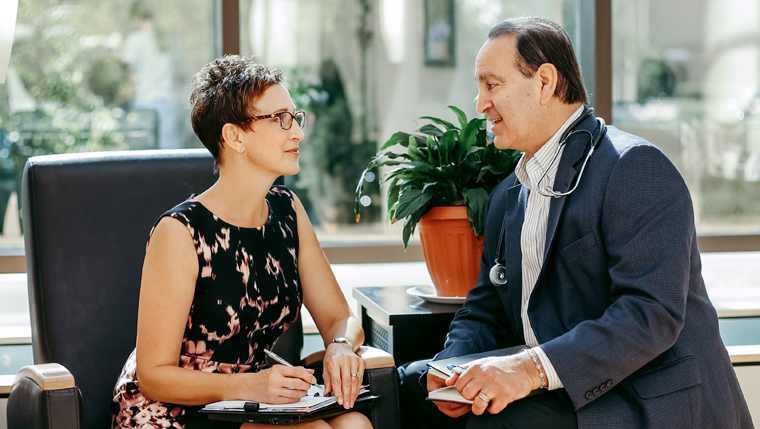 Back in 2003, I was 37 years old with a 5-year-old and 2-1/2-year-old and never expected a diagnosis of breast cancer. I underwent a mastectomy with free-flap reconstruction. Lymph nodes were involved and an additional spot of cancer that was previously undetected was found. Chemo and radiation were next.

I was young, healthy and strong and had two beautiful sons and a supportive husband to motivate me. My optimistic nature also did a lot to help me through this situation. The chemo and radiation were relatively easy for me. I had very few side effects and problems over the course of the treatment. It was all done in 9 months’ time and I was glad to have it behind me so I could focus on my family and my career. I did take Tamoxifen for 5 years as recommended and had no obvious side effects.

In November of 2014, I had an MRI to diagnose an issue in my leg. Turns out the issue wasn’t in my leg. It was metastatic cancer on the spine that was blocking a nerve pathway and pinching a nerve that affected my leg. I thought making my 10-year milestone put me in the clear. Boy was I wrong. Cancer was back after 11-1/2 years, and I was terrified.

The cancer had spread all over my bones – spine, hips, pelvis, ribs, collarbone. I didn’t know how I would survive this, but I quickly returned to my original oncologist to work out what could be done. Since it seemed we caught it early and it responded immediately to the anti-hormone therapy, I was feeling hopeful. But this was serious stuff that called for a lot more than I had done before. I was older and wiser and wasn’t giving up my goal of making it to my 100th birthday so I connected with a cancer coach. Boy did I have a lot to learn!

With my coach, I cleaned up my diet, my home and my lifestyle. I learned how to manage my stress and take better care of me. I stopped drinking alcohol and stopped eating red meat. The changes to my diet were not actually so drastic for me but I still ended up losing so much weight that people feared the worst for me. After a few months, I had learned how to eat well without eating meat, dairy or sugar, and I put a few pounds back on, which pleased my family and friends.

When talking to my oncologist he would recommend that I “go eat a brownie” or “have a margarita”. When I would ask about supplements or things I felt would help me stay strong and healthy, he would tell me I could “waste my money” if I wanted to and he referred me to the Integrative Medicine Department. That department was not at all integrated with the rest of the hospital! It was literally a different building two blocks away. It might as well not have been affiliated at all.

I didn’t feel supported in my efforts to do all I could to stay in the best possible health and manage this disease. My conventional oncologist just wanted to put me on the latest drug protocols and leave it at that. I wasn’t comfortable leaving it in the hands of conventional medicine alone.

Then I found The Block Center in June of 2016. I scheduled an initial consultation and liked what I heard. Dr. Block agreed with the protocol I was being treated with but had more to offer. He supported my diet and lifestyle changes but also wanted to ensure that I was on a supplement regimen that would put my body in the best possible state to maintain my health and beat cancer.
In late July of 2016 a liver tumor showed up. I decided to fully switch my care to The Block Center. With the new tumor, Dr. Block wanted to keep me on one med and add a new one. Within six months the liver tumor was fully resolved!

Dr. Block encouraged me to engage in a more routine exercise plan and really made me feel like I would be able to live to be 100. I have felt so supported and feel that I have really found a partner in my health and wellness journey.

I’ve been with The Block Center for just over a year now and I’m feeling strong and healthy and appreciative of all the support I receive. I can ask a question about anything I hear will help fight cancer and I get a respectful and educated answer. The full Block Center team knows so much about effectively integrating conventional with supplemental therapies and that gives me a lot of confidence. I believe the terrain panel every 4 months definitely helps me determine what my body needs to be in the best health to keep cancer at bay. In fact, I have had several stable scans this year that show the cancer is not progressing. I’m happy to have such a great team of people that are willing to partner with me for my best possible health.