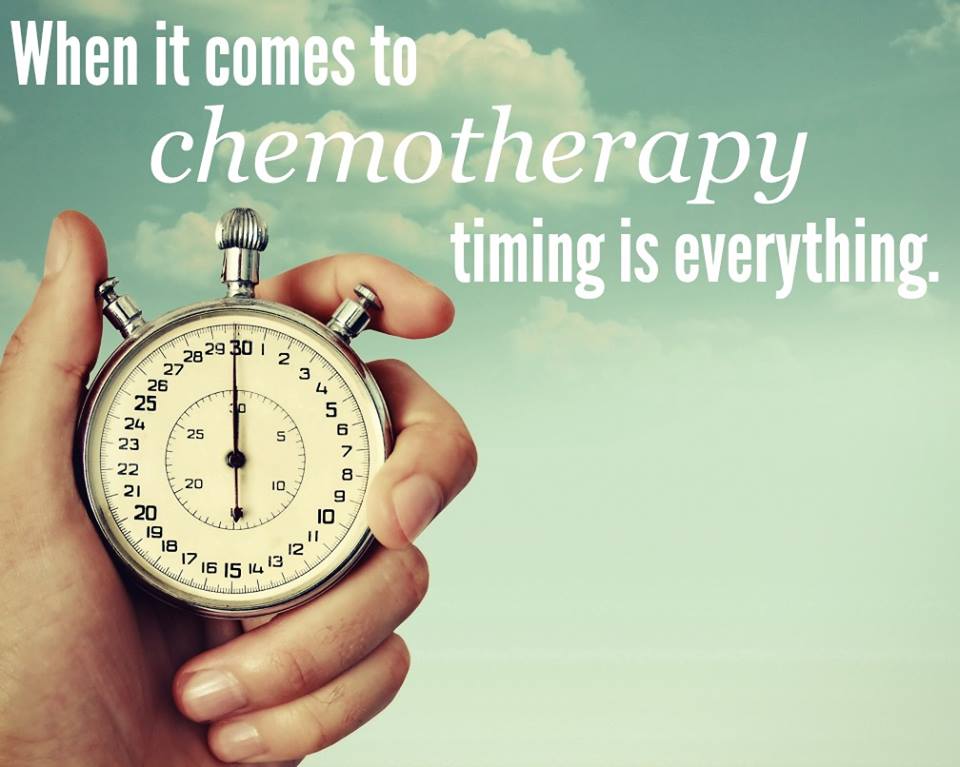 Back in the early nineties, I was looking for strategies to help my patients better tolerate some of the more invasive cancer treatments, including chemotherapy. So, when I came across some of the research of Dr. Bill Hrushevsky, clearly the pioneer in the field of chronomodulated chemotherapy, it was a “light-bulb” moment for me. Dr. Hrushevsky suggests that his work demonstrates a substantial reduction in adverse effects; in some cases up to an 85% reduction! This prompted me to begin researching what it is about chronomodulated chemotherapy that makes this possible.

It turns out that most every drug has an optimal time of day or night when it is most effective and least toxic. By administering drugs during this time, there is substantial evidence demonstrating greater treatment response and improved outcomes. Other evidence demonstrates – and my own clinical experience confirms this – that you can rechallenge a patient with the same exact drug protocol that they had previously not responded to or had stopped responding to and, by chronomodulating the administration of the drug, attain an improved response rate among 40-50% of the patients.

It’s important to note that it’s not simply the timing that’s important, but also the style of the infusion that makes a difference. In the case of chronomodulated chemotherapy, the infusion is based on what is referred to as a sinusoidal wave, and requires special programmable infusion pumps. The pump initially infuses the drug in very small increments. Then slowly and methodically, the amount of drug is administered at an increasing rate until a peak concentration is reached. The infusion is slowly reduced, until the remaining drug has been fully administered.

It turns out that we have 9 specific clock-related genes that control a great deal of our biological functioning, including sleeping, eating patterns, heart rate, body temperature, hormonal production and others. Cancer cells and the drugs used to treat them have their own time control. Optimally, cancer drugs should be administered at the precise time when specific cancer cells are dividing and are more vulnerable to cell death. Fortunately, this is the same time when healthy cells are at rest and have the least sensitivity to toxicity from chemotherapy. Thus, getting the timing and the style of administration of a patient’s cancer drugs right is critical for optimizing the best response and outcome, with the least adverse effects.

Reducing the side effects of treatment is additionally important because research has demonstrated that approximately 25% – 35% of patients discontinue chemotherapy treatment prematurely due to the debilitating psychological and physical consequences of treatment. We believe the interventions of chronomodulated chemotherapeutic administration, combined with integrative care and intravenous nutrition, provide significant value to patients. We also provide detoxifying compounds to mitigate toxic metabolites from the chemotherapeutic drugs, because toxic metabolites contribute to drug resistance, toxicity and mutations. These toxic metabolites make cancer cells more aggressive, and the treatment less effective.

The medical oncology community is driven primarily by introducing new drugs, but not by the timing, style and method that they are infused. It is truly unfortunate that with our knowledge that many chemotherapies have an optimal timing when they are the least toxic and the most treatment sensitive, there isn’t just as much drive and interest to attend to how and when these drugs are administered.