There’s been a lot of talk about the potential health benefits of flaxseed, and whether it can help prevent or fight breast cancer.

But does the talk actually have any scientific basis?

According to a review article published last year in Integrative Cancer Therapies, it does! As reported in the review, a study of newly-diagnosed breast cancer patients who consumed 25g of flaxseed per day (as part of a healthy diet) showed that their bodies actually mounted a natural defense against the cancer cells through increased apoptosis of the tumor cells. A decrease was also seen in the expression of a cancer-related gene (HER2), meaning that the gene was less active when flaxseed was consumed.  Another decrease was seen in the proliferation of cancer cells. The review concluded that there is significant evidence that flaxseed decreases the risk of breast cancer, both by preventing it in women who are at risk, and by decreasing the mortality risk for women who are already living with breast cancer. 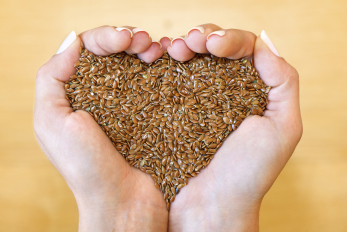 The study came out of a collaboration between 8 different institutions in Canada, including very well-renowned universities, hospital research centers, and naturopathic schools. In this study, four databases of research results were searched, bringing results for 1892 studies. From these, ten representative studies that included the best research methods were chosen, with 2 randomized control trials, 2 uncontrolled trials, 1 biomarker study, and 5 observational studies.

The study also looked at the effect of flaxseed on hot flashes. These results showed a non-significant decrease with a diet including only 7.5 g flaxseed per day, but suggested that 25 g/day could be helpful in not only reducing hot flashes, but in decreasing the number of cancer cells. It appears that adding flaxseed to your daily diet can reap significant health benefits!

For some background information on flaxseed (which is a plant), the scientific name for flaxseed – also known as linseed – is Linum usitatissimum. The term “usitatissimum” comes from Latin, and can be translated to “the most useful.” In addition to the health benefits of its seeds, fibers from the stalks of the flaxseed plant are used to make linen products. Originally believed to date back tens of thousands of years in Eurasian areas, it now grows globally, and in almost every US state.

The health benefits of flaxseed are the easiest to obtain when the seeds are ground. It can be added directly to smoothies and used in combination with flour for baking muffins, pancakes, breads, etc.

Here’s one option for adding the health benefits of flaxseed into your daily diet (adapted from FLAX.com):

In a medium saucepan, bring water to a boil over high heat. Stir in oats, dried fruit, and cinnamon. Reduce heat, cover, and simmer for 2 to 4 minutes, stirring occasionally. Stir in ground flaxseed.

Can be served with maple syrup and soymilk, if desired.

0 responses to “Flaxseed and Breast Cancer”