For many years, there have been questions around whether or not there is a connection between dairy intake and cancer risk. For instance, a 2013 observational study found that breast cancer patients whose diets – following their cancer diagnosis – contained higher proportions of high-fat dairy products, were more likely to die from breast cancer and from other causes than those who consumed low-fat or no dairy. In addition, many studies over the years have examined whether ovarian cancer might be associated with dairy product consumption, but a recent meta-analysis found only a slight association with whole milk consumption and ovarian cancer risk.

Researchers at Lund University in Sweden have just published a study that takes an interesting approach to this question. In Sweden there is a very extensive, national medical records registry. This large database includes all of the different diseases and conditions that people in the Swedish population have been diagnosed with. The database makes it easy to link different conditions together and see which conditions might be causally linked. 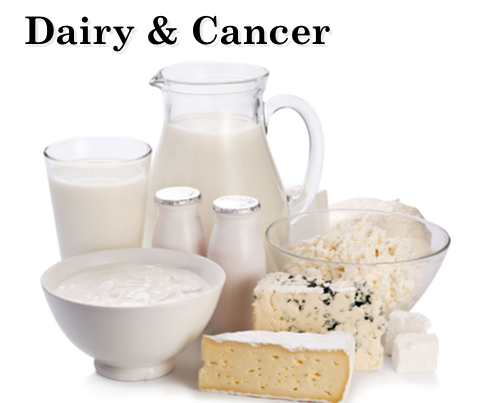 What the researchers did then was compare the cancer rates among the lactose intolerant patients, and their non-lactose intolerant family members, with the rates of cancer occurrence in the national medical records registry. They looked at three specific cancer diagnoses – breast, ovarian and lung cancers. They chose breast and ovarian cancer because of the previous research on the role of dairy in these two cancers. They chose lung cancer because it is known that the hormone insulin-like growth factor (IGF-1) is important in the causation of lung cancer. IGF-1 acts to stimulate growth in childhood, and encourages tissue growth and cell division in adults. It is known to play an important role in several different cancers. Dairy products, as well as other high-protein foods, have long been observed to increase levels of IGF-1, and the researchers thought that the high consumption of foods that promote IGF-1 levels might be linked to the IGF-1 promotion of cancers.

These figures are quite startling, and cry out for an explanation. Of course, direct stimulation of cancer cells through the action of the hormone IGF-1 is one possible cause, as in the example of lung cancer. But there are other possible causes as well. It could be that dairy consumption results in a higher-calorie diet and more obesity, a known risk factor for breast and ovarian cancer. It might also be that the lactose-intolerant patients substitute dairy milk with other kinds of beverages that may have cancer-protective features. Soy milk, for instance, might actually have a cancer protective benefit, if used in large enough quantities: a recent analysis grouping the results of 35 studies found that in Asian, but not in Western populations, soy use lowered breast cancer risk. Maybe the soy consumption of lactose intolerant people was closer to that of Asian populations than of most people in Western countries. On the other hand, there might be differences in lactose intolerant people that we are not yet aware of; for example, perhaps something related to their normal intestinal bacteria, that is protecting them against cancer.

This area definitely needs more research to determine just what may be happening in the lactose intolerant people to apparently reduce their risk of these specific cancers.  We look forward to seeing more from the Lund University researchers in this area.  In the meantime, as regular readers of our blog already know, we recommend to all of our patients that they significantly reduce or, better still, eliminate all dairy products from their diet.  With so many healthful and tasty alternatives available, the vast majority of patients report this to be a fairly easy transition!