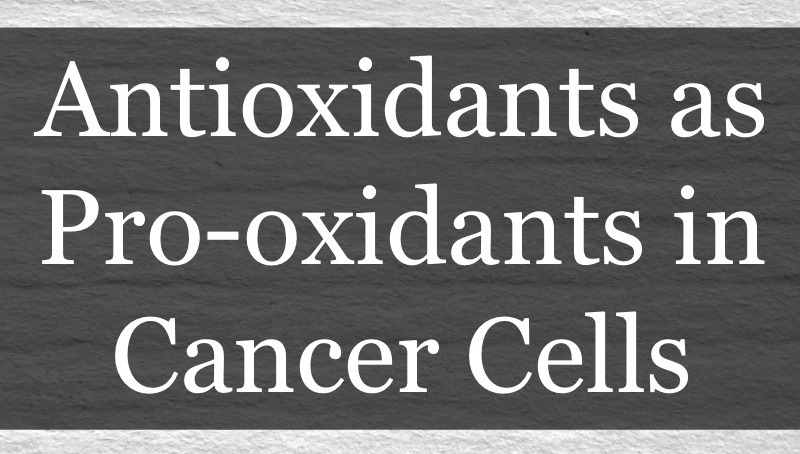 When is an antioxidant not an
antioxidant?  This curious question was
explored in a scientific poster that Dr. Block presented at the 10th
International Conference of the Society for Integrative Oncology (SIO), held October
20-22 of this year. The answer to the question was suggested in the title of
the poster, “Antioxidants as pro-oxidants in cancer cells.”  What, you might ask, is a pro-oxidant?  As the name suggests, it’s the opposite of an
antioxidant!  Antioxidants neutralize
free radicals, while pro-oxidants stimulate and produce free radicals, or, in
scientific jargon, reactive oxygen species (ROS).

Why are we interested in producing free
radicals in cancer cells?  Isn’t this the
opposite of what we want to do?  And why
would an antioxidant suddenly turn into a pro-oxidant when you put it into a
cancer cell?  Actually, it’s well known
that many antioxidants can act as pro-oxidants – this fact even appears in
Wikipedia!  However, the Wikipedia
discussion of antioxidants overlooks some new data that are coming to light
about pro-oxidants and antioxidants as they relate to cancer treatment.

A possible mechanism has come to light with a
new understanding of how chemotherapy agents work.  It turns out that the free radicals produced
by chemotherapies cause cancer cells to “commit suicide,” a process known as
apoptosis.  We know that apoptosis is
triggered, in part, by free radical damage to parts of the cancer cell.  In fact, it’s been suggested that cancer
patients avoid antioxidants entirely because of a theoretical fear that they
might neutralize this free radical damage and impede apoptosis, both from
chemotherapy and from other agents.  Dr.
Block and his research team, however, realized that this was in direct
contradiction to strong data that are very well known among scientists who
study natural products.  There are, in
fact, numerous antioxidants that are well known to actually CAUSE apoptosis in
cancer cells.  Curcumin, EGCG from green
tea, and melatonin are just three of the best-known antioxidants that are
widely known to cause apoptosis in a variety of different types of cancer
cells. But they don’t cause apoptosis in normal cells, and, in fact, can
protect them from many kinds of carcinogenic damage.

So how is it that these well-known antioxidants
can be causing apoptosis if they impede free radical activity?  Our research team started delving into the
literature and found out that there is an explanation for this phenomenon, and
also for why it might occur in cancer cells, but not in normal cells.  Amazingly, laboratory scientists have
discovered ways to tell when a substance causes free radicals to be formed
inside of cells.  There are substances
that are described as molecular probes that test for these intracellular free
radicals.  And they can easily test any
substance to see if it causes apoptosis in either cancer cells or normal
cells.  What researchers have discovered
is that many antioxidants cause apoptosis in cancer cells when they are applied
in high doses to cells grown in test tubes.
The same doses, however, do not cause apoptosis or otherwise damage
normal cells.  When the molecular probes
are used, scientists find that the high-dose antioxidants cause cancer cells to
produce free radicals.  This is what may
be triggering apoptosis.

Why would this happen in cancer cells and not
normal cells?  Another line of study has
been shedding light on this aspect of the question.  It turns out that antioxidants can undergo
reactions with metals.  Specifically,
many of the natural antioxidants that are known to trigger apoptosis in cancer
cells have been found to form free radicals when they interact with
copper.  Cancer cells are well known to
have high concentrations of copper and other metals such as iron. Copper in
particular plays an important role in the basic metabolic processes of the
cancer cells, in angiogenesis as well as in metastasis.  Cancer cells need copper for these processes,
which are absent in normal cells.   When
natural antioxidants react with copper, they target cancer cells with free
radicals, which can cause apoptosis.
This may explain why they cause apoptosis in cancer cells, but not in
normal cells.

So when we give antioxidants that generate
intracellular free radicals, along with chemotherapy that also creates free
radicals, what happens?  Do the
antioxidants neutralize or interfere with the chemotherapy, or do their
pro-oxidant effects dominate?  For each
of the antioxidants for which our research team found pro-oxidant effects, they
also searched for studies in which the antioxidants had been given with
chemotherapy drugs.  In almost all of
these cases, the research indicated that
antioxidants actually enhanced the effect of the chemotherapy drugs.  These studies were done not only in the test
tube, but also in animals that have tumors, and, importantly, in humans.  A large review article, for instance, found
many experiments in which curcumin was given with chemotherapy (or radiation),
increasing its effectiveness.  A series
of clinical trials conducted in Italy found that high-dose melatonin increased
the effects of chemotherapy, but reduced its toxicity to normal tissues.  And, while the test-tube studies required
high doses of antioxidants to obtain their pro-apoptosis effects, the studies
in animals and humans used very reasonable doses.

This very interesting phenomenon may explain
why antioxidants did not eradicate the effects of chemotherapy in the
randomized trials our research staff reviewed.
It certainly deserves more scientific explanation, and Dr. Block and our
research team plan to publish a scientific paper on the topic, which will
hopefully stimulate more research in this area.
Certainly, the researchers at the SIO meeting were very interested in
their findings!  We hope to report more
to you about this interesting topic in the future, since we know that many
patients remain confused about the use of antioxidants during cancer
treatment.

One response to “Antioxidants as Pro-oxidants”